It's been a long, long time since one of Greenland's oldest football clubs, GSS, has won a senior national championship, but they now have, at long last, something to celebrate. The club, founded in 1944, reached its first senior national final since the men's team took the title for the fifth and last time in 1976. This time, though, it was the women's team who finished top of the pile this time around, and in doing so, made history; it was the club's first national women's title.

GSS' previous best performance at a national championship came in 2003, when they finished in third place; since then, both they and the men's team have long lived in the shadow of B-67, NÛK, and, more recently, IT-79, but this is hardly surprising as the club has tended to concentrate on the indoor game in recent years. The majority of the GSS team played for B-67 in last year's championship due to registration problems with their own club, and helped their cross-town rivals finish as runners-up.

Six other teams took part in the tournament, which was held in Qeqertarsuaq: hosts Disko 1976, their local rivals G-44, GSS' cross-town rivals and 2017 champions NÛK, UB-83 (Upernavik), UB-68 (Uummannaq), Aqisseq (Kangaatsiaq) and Nagdlúnguak-48 (Ilulissat), who, like GSS, have been dominated by a team from across town, in this case I-69 - at least as women's football is concerned.

NÛK and I-69 have had a monopoly on the women's national championship since 1995; since then, no other team has won the title, and only once since 1997 has either of the teams finished outside the top three. To the surprise of many, I-69 declined to enter the competition this year; this was due to some organisational issues which led to a lack of interest in training from many of the players, so the club decided to regroup in order to field a stronger team next year.

NÛK and I-69 have had a monopoly on the women's national championship since 1995; since then, no other team has won the title, and only once since 1997 has either of the teams finished outside the top three. To the surprise of many, I-69 declined to enter the competition this year; this was due to some organisational issues which led to a lack of interest in training from many of the players, so the club decided to regroup in order to field a stronger team next year.

Due to I-69's non-participation, the way was open for other clubs to challenge NÛK for the title, and the most obvious challengers from Group A were UB-68, runners-up for the sixth time in 2016 and the only team in the group who had never won the championship. They obliterated their group opposition, scoring forty goals and conceding just one, reaching double figures in two matches. Olina Kristensen scored four of their goals against UB-83, whilst team-mates Karoline Malakiassen and Evita Grønvold each grabbed hat-tricks; Kristensen then hit seven goals against Nagdlúnguak-48. Hosts Disko 1976 finished second on goal difference, due in no small part to their being the only team not to lose by double figures against UB-68. 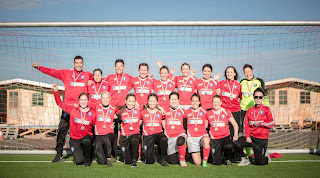 
There were only three matches in Group B, and the closest of the three was the opening match between NÛK and GSS, which ended with GSS, perhaps surprisingly, winning by six goals to four with Najaaja Anja Lyberth contributing three of the goals. NÛK then won their next match against Aqisseq 8:2 to put them into the semi-finals, before GSS annihilated Aqisseq, thrashing them 27:1 to finish top of the group. Asii Kleist Berthelsen scored thirteen goals against the team representing the small village of Kangaatsiaq, whilst Lyberth added another six.

NÛK cruised past UB-68 in the semi-finals with the minumum of fuss, winning 4:1, the goals being shared between Pilunnguaq Chemnitz and Aili Pedersen. In the other semi-final, GSS' 14-year-old goal-machine Kleist Berthelsen added another nine goals to her personal tally as her team scored nineteen goals without reply against Disko 1976.

Before the NÛK and GSS met in the final, the two play-offs for the minor placings were played and, true to form, they were packed with goals. Nagdlúnguak-48 finished bottom of Group A, and as only seven teams took part in the tournament, they were eliminated as they came last in the four-team group.

Aqisseq faced UB-83 in the fifth-place play-off, and were once again on the end of a double-figure defeat, this time at the hands of UB-83 as they went down 13:1. The third-place play-off was between UB-68 and Disko 1976, and it was to be another chastening defeat for the hosts. UB-68 had already scored forty-one goals; they scored another sixteen in this game alone to round off their tournament in style, finishing in third place. Malakiassen scored seven of them, whilst Grønvold weighed in with four. 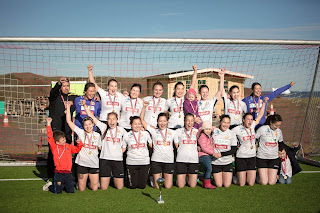 The final, meanwhile, was one-way traffic, and Kleist Berthelsen weighed in with a hat-trick as GSS crushed reigning champions NÛK 6:1; Arnarissoq Møller scored twice as GSS moved up the gears - no doubt helped by the sending-off of NÛK's Pilannguaq Chemnitz for a second yellow card, the only expulsion of the tournament - winning their first-ever national women's championship in rampant fashion after coming from nowhere. They may well have to defend their title next year without Kleist Berthelsen, however, as the youngster has moved to Danish champions Fortuna Hjørring to play for their under-16 side.

Berthelsen, described as one of four key players for the club by manager Peter Hardenberg Davidsen - who mentioned that he 14-year-old has played for GSS' boys under-11, under-13 and under-15 teams - was cited as someone with a very bright future in the game by team-mate Vivi Fleischer, who herself bravely took part in every game in the competition despite suffering from a debilatating illness. Fleischer added that there was a "big difference between the teams. For example, we won 27:1 against a team from northern Greenland [Aqisseq] and won the final against NÛK with 6:1."