For many football fans, Dutch football starts and ends with Johan Cruijff, Oranje, Ajax, Feyenoord and PSV. But, there's an awful lot more to it than that, of course. This season, the country's southernmost province, Limburg, has two clubs in the Eredivisie, the highest level of the country's pyramid: VVV Venlo and Fortuna Sittard. But, football is played from north to south in the province, and this little selection of photographs taken over the past few years will hopefully give groundhoppers and others a taste of some of Limburg's smaller clubs. 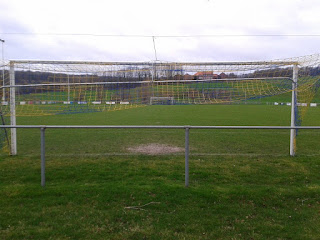 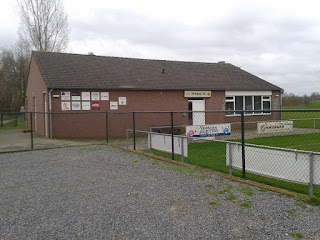 Two men, Willem Simons and Sjef Keulen, were responsible for the founding of a football club in the village of Partij, situated in south Limburg, and it was done in the most simple of ways: they advertised a meeting to create a club in the village by sticking up a poster a tree in front of the village pub. If they were worried that no-one would turn up, their worries were unfounded; the idea of setting up a club proved so popular that one was founded on 20 August 1933.

The intention was to call the club IVO - In Vriendschap Opwarts - but a club with that name (IVO Velden) already existed in Limburg, so the members of the newly-formed organisation settled on VV Partij '33. The club, now in the tenth level (Vijfde Klasse) of Dutch football, plays its home games at the Sportcomplex de Tevent, and, in addition to a number of fielding youth teams in conjunction with RK Mechelse VC (from the neighbouring village of Mechelen), has a first and second team, a veterans' team and also a walking football section. 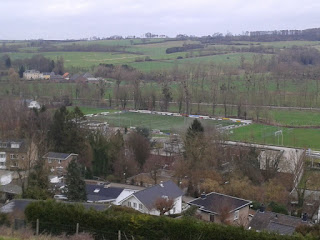 The town of Gulpen lies just to the west of Partij, and the local club, FC Gulpen, is based at the Sportpark aan de Ringweg te Gulpen on the eastern edge of the town. Gulpen has a footballing history dating back to 1920, with the foundation of the short-lived Galopia. Six years later, Excelsior Gulpen was formed, but folded in 1930. Later came RKGVV before the foundation of what is now known as FC Gulpen on 10 March 1940.

The club's first home was at Rosgats, before it briefly moved to De Laan and then back to Rosgats. The club moved again to De Wieldergracht, and then to the tiny hamlet of Cartils in around 1960, but were forced to find other accommodation. FC Gulpen moved to their present home in 1962, which was renovated in 2011, and the first team now plays in the ninth level (Vierde Klasse) of Dutch football. In addition to three senior teams, the club has seven youth teams competing up to and including under-11 level, ten youth teams teams in conjunction with neighbouring clubs RKVVM and FC Sibbe, and a veterans team. 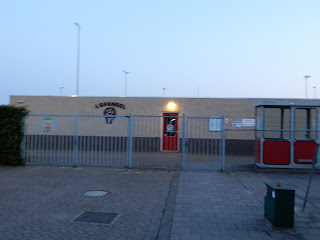 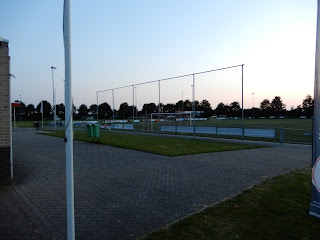 The village of Sevenum lies in north Limburg, just a few miles outside Venlo, home of Eredivisie side VVV Venlo, and and football was introduced to the village during the First World War by Dutch soldiers stationed along the border with Germany. It was a certain curate by the name of Houben who introduced the local youth to the joys of football, and a club, Zwart Wit, was founded at the then Café Timmermans on 19 May 1918. Zwart Wit, as the name suggests, played in black and white shirts, and were based in the hamlet of Siberie, situated between Sevenum and Maasbree.

The club changed its name and colours in 1927, when it became known as Sparta '18 and the strip changed to red and white striped-shirts and black shorts, presumably in homage to the more famous Sparta Rotterdam. After a couple of temporary moves, the club moved 1935 to a new ground, replete with two small stands, at Sondertseveld, near the centre of Sevenum. Unfortunately for Sparta '18, the local council had their eye on the ground, and the club were forced to move to their present home, the Sportpark 't Spanse in 1999. Sparta's first team plays in the Derde Klasse (eighth division); the club currently has 5 senior men's teams, a veterans team, 2 women's team - the first of which celebrated its half-century in 2019 - 11 youth teams from under-7 up to and including under-19, and 2 veterans' teams. 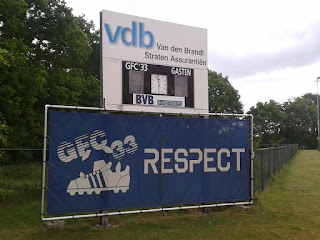 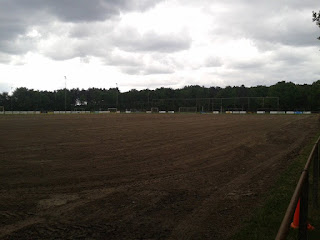 Grubbenvorst lies just a few miles to the north-east of Sevenum, and football there dates from around the end of the First World War, with the creation of the short-lived Blauw Wit. This was followed by the setting-up of another club whose existence was short: GLC, or, to give it its proper name, the Grubbenvorst Lottum Combinatie, a combination of forces between Grubbenvorst's football lovers and those from the nearby village of Lottum.

A third attempt to set up a village team saw the birth of GVV in 1926, and this team lasted until the founding of RKGFC (Rooms Katholieke Grubbenvorster Football Club) on 20 April 1933, which changed its name to GFC '33 in 1977. The club played for years at De Comert, at the northern edge of Grubbenvorst, until the early 1980s, when it moved to its present home at the Sportpark D'n Haspel on the other side of the village. The first team now plays in the Vierde Klasse, and has a total of four senior teams and a veterans section. 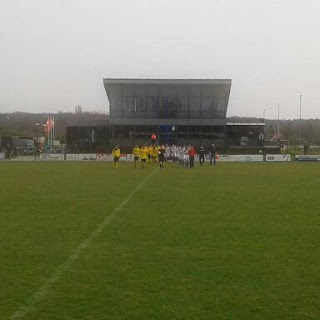 Immediately to the south of Venlo lies the town of Tegelen, which has hosted football clubs for well over a hundred years. Most of them have merged and/or come and gone since TVV were founded on 12 May 1907. TVV were eventually replaced by VV Tegelen, which, along with Tegelse Herten and RKVV Steyl, merged on 1 August 1949 to create Sportclub Irene, who play at the Sportpark de Bakenbos on the outskirts of town.


Sportclub Irene, better known as plain old Irene, have shown the potential to progress to the semi-professional reaches of Dutch football in the past, but prefer to remain amateur with an eye to providing talent for the larger local clubs, such as VVV Venlo. It is also a favourite venue for clubs from near or far looking to hold training camps away from the public eye, such as PSV Eindhoven, FC Porto, Anderlecht and Racing Genk. 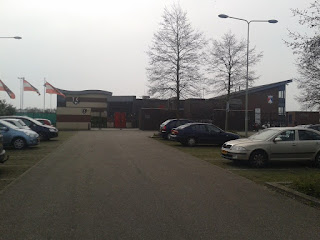 But, the Sportpark de Bakenbos isn't only home to one football ground, but two..
﻿ 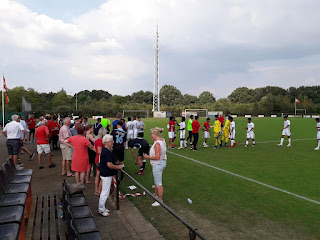 The second club residing at the Sportpark de Bakenbos complex (with, as stated above) its own ground, is TSC '04. Its full name is Sportvereniging Tiglieja-Steyl Combinatie '04, and, as the name suggests, is the result of a merger between Tiglieja and FC Steyl '67, which was set in stone on 1 July 2004. However, the club regards its founding as having taken place on 22 June 1925 with the creation of RKVV Tiglia, one of a couple of clubs which themselves eventually merged to form Tiglieja.

Despite following Sportclub Irene's lead and hosting a number of clubs on pre-season tours and training camps, such as German side FSV Mainz and the UAE's Al-Jazira (seen above after defeating EVV Echt 3:0 in 2018), the club has found itself in financial difficulties in recent times and has been haemorraging members. So much so, in fact, that TSC '04, which plays in the ninth level of Dutch football, have considered merging with their next-door neighbours, and there is a distinct possibility that this will happen in the next few months. 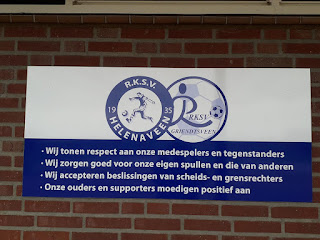 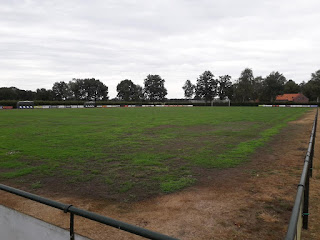 Two clubs which did merge back in 2016 were RKSV Helenaveen and RKSV Griendstveen. The tiny village of Griendstveen lies just inside Limburg, where the local club was founded on 1 May 1948. The club played their home games at the Sportpark de Wiek, which lay parallel to the intercity railway line between Eindhoven and Venlo; now, only the now boarded-up social club remains. RKSV Griendstveen spent its existence bumping along the bottom of the Dutch football pyramid, as did RKSV Helenaveen, founded on 27 September 1935.


RKSV Helenaveen, from a village of the same name not much bigger than - and five miles from - Griendstveen, played its home games at the Sportpark de Stikker, which is the home of the now SV Helenaveen Griendstveen, and spent its existence playing in the lowest reaches of Dutch football.


The two clubs decided to merge their youth teams in 2015; Griendstveen's first team had been hampered by the loss of more and more players, so much so that, in 2016, both teams decided to merge their second strings. At the end, Griendstveen were hardly able to field a full first team, making a merger with their near neighbours an inevitability, and both clubs came together to form ST Helenaveen/Griendstveen. The club changed its name to SV Helenaveen Griendstveen in 2018, and now plays in the bottom division of the Dutch pyramid. 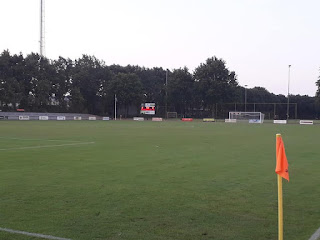 Further south in Limburg is the town of Reuver, and the local football team, VV Reuver, celebrated its 90th anniversary in 2018. The club, currently in the Vierde Klasse (ninth level), has had some success in the past and has played as high as the seventh level, mostly in the 1970s and 1980s, but dropped down to the tenth and bottom division in 2013 before winning it in 2015. They were relegated again in 2016, but bounced back up a year later. The club's women's team made waves in Dutch football during the late 1990s, but fell on lean times and actually disbanded for a spell before returning to action a few years ago.


The club has plans to develop their home ground, the Sportpark Dijckerhof, in the near future, and having already successfully revamped their social club, the hope is a small stand will be built - with a tea-hut beside it, an innovation which is actually quite rare outside professional Dutch football. 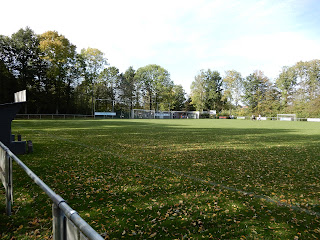 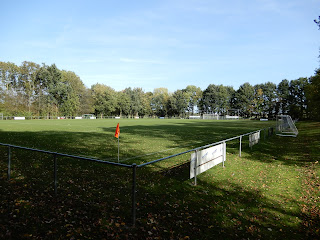 Perhaps the southernmost football club in the Netherlands is located a mile or so from the Belgian border, in the small village of Noorbeek, and plays at the football ground which bears the name of the village. SNC '14, or Slenakse Noorbeekse Combinatie 14, was, as the name suggests, created in 2014 due to - you guessed it - a merger between Sportclub Slenaken 1963, which was founded in, surprisingly enough, 1963, and Noorbeekse Boys.

Sportclub Slenaken reached the eighth level in the 1990s and Noorbeekse Boys the ninth, three years before the two clubs officially merged, though the two teams had been pooling their more youthful resources for a while before then. SNC '14 currently play in the bottom level of Dutch football, though their youth teams merged with the larger BMR (based in the nearby village of Mesch) a couple of years ago, and the club fears for its future as it now consists of just the first team and reserves. The club's facilities are basic but spotless, and the staff are thoroughly friendly. It would be a shame to see the club disappear during what has now become the close-season.