CORONA VIRUS TIMES: MADE OF STEEL


One of the former is based in one of the USA's footballing heartlands, the blue-collar region on the country's eastern seaboard to the south of New York. Steel FC, based in the city of Pittsburgh, Pennsylvania, were only founded in 2015 yet have become something of a success story, albeit one which has, until now, very much flown under the radar. 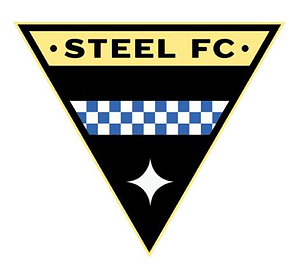 The club takes part in the Greater Pittsburgh Soccer League (GPSL), which involves around twenty teams spread across three divisions, and plays many of its home matches at the Cool Springs Sports Complex in the city's Bether Park district.  (There is also a Women's GPSL system, which is split into an Open women's league and an over-23 women's league.)

They started off on the lowest rung of the GPSL ladder, the Miners' League, in 2015, but gained promotion to the second division, the Champions Division, that year. They won that in 2017 and have been playing in the Premier Division since then, improving steadily as they go along, delighting manager Brian Luchini, who has been with Steel FC right from the start - in fact, he founded the club:


"I decided to form Steel FC because a team I put together that played in local leagues was looking for a more competitive soccer scene. The Greater Pittsburgh Soccer League offered that, so [Steel FC was founded and] we joined. Through the years, between making cuts and recruiting other players, I have been able to put a successful squad on the field.

"I have been very pleased with the way my team has been playing. 2020 is our third year competing in the Premier Division. Our first year we took fourth place in the standings with a record of eight wins and six defeats [during the regular season] but made it to the final and finished runners-up. This past year we took second in the standings with 10 wins, 3 draws and 1 defeat, and again came runner-up in the final. Now as a top competitor in the best division in Pittsburgh, the Premier Division, we strive to win the championship each year."


Steel FC haven't just concentrated on maintaining top-level status and improving on that since their rise to the Premier Division. They have also taken part in cup competitions over the past twelve months or so, including what was once the most prestigious competition in American football, the US Open Cup, and gave a very good account of themselves.


"We competed in the USASA Amateur Cup and for our first time competing, we got to the Region One final by beating [Baltimore side] Christos FC and Philadelphia Lonestar, losing to eventual overall champion, Newtown Pride [the team from Connecticut won the regional title in June of last year before beating Houston-based Horizon FC to win the overall competition and qualify directly for the 2020 US Open Cup].


"We also participated in the Open Cup this past year and made it to the 3rd qualifying round beating Germantown City [another team hailing from Maryland] and Tartan Devils. One more win and we would’ve been in the tournament proper, but we lost 3-2 down in Maryland to Christos FC. Again, for our first time in this competition I think we did very well and I couldn’t be more proud of my squad." 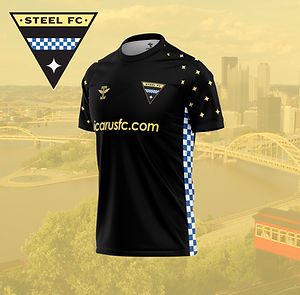 But why the name Steel FC? Luchini, who is not only the team manager but also the coach and the man behind the club's prolific social media drive - like so many other clubs, they have taken part in virtual cup competitions and such like during the Corona virus crisis to keep themselves occupied and, in their case, to spread the word about Steel FC - gave a concise and clear explanation for the choice of name: "Our team name is exactly what it stands for, Steel. Pittsburgh is a hardworking, blue-collar, town with a rich history of steel mills. That’s where Steel FC comes from. It’s a simple name that clearly shows our roots."


But, success doesn't come easy for any club, and it is the case for every club, whether it has money behind it or no; for Steel FC and most of the clubs in the GPSL, it is a matter of them scraping by as best they can. The city's highest-ranked club, Pittsburgh Riverhounds SC, plays in the Eastern Conference of the USL, the second tier of America's football pyramid. It is, however, hard for clubs lower down the ladder to attract football-lovers to local-league games, and harder still to build up a fan-base, as Luchini readily admits.


"In Pittsburgh there is barely a lower league following. While this does hinder us, it also is an opportunity for us to show what we are made of and hopefully attract fans along the way. The best way to get involved is to come to games and meet the team and our players. We also really appreciate any jersey purchases or merchandise purchases. All money helps go towards funding. Because we are not sponsored, my players pay for everything out of pocket. Purchases [of merchandise - the club does a natty line in scarves, for example] help us pay for our 2020 GPSL season along with the costs of competing in regional and national tournaments."


But, all preparations for the new season had to be put on hold due to the Corona virus taking hold across America, and Pittsburgh was also affected by events, the city itself being placed under lockdown. However, it hasn't stopped Luchini working on behalf of his club off the pitch. The club has been heavily involved in various online competitions, and this hasn't all been about getting exposure and gaining more followers on Twitter, but about keeping the club afloat financially, looking for sponsors and selling club apparel via Twitter. The club has also been keeping itself in the public eye by giving away scarves and stickers, and has now reached a healthy 1300 followers.


Luchini: "We are still on the hunt for sponsors as we do not have any currently. With Covid, and most businesses geared towards youth, it's hard to find a sponsor in Pittsburgh. We would absolutely love a company come on board and partner with them.


Steel FC's new all-black kit has also proven to be a bit of a hit with shirt-collectors, and the club's new badge, which was unveiled earlier this year, is a homage to its home city, as Luchini explains: "The badge represents Pittsburgh. The triangular shape represents the Monogahela River, the Allegheny River and where those two rivers meet to form the Ohio River at The Point. The black and gold are the main colours of Pittsburgh. The stars are a nod from our old design, while the blue and white chequered pattern is taken from the City of Pittsburgh flag."


Meanwhile, on the pitch, like most clubs the world over, Steel FC has been affected by the Corona virus, but the players are finally starting to get back into some sort of routine and, as well as playing a couple of friendlies during June and July, the club also hosted its own Steel City Super Cup tournament for the first time during the first weekend of August, reaching the semi-finals where they lost to fellow Pittsburgh team LaComarca Arsenal on penalties.


"The team has been training individually since the lockdown", said Luchini at the end of July. "However, since restrictions have been semi-lifted, some of my players have resumed their club coaching and private training duties. Additionally, we have entered a Friday night recreation league to keep getting touches on the ball and for fitness before our GPSL season starts back up."

Their GPSL has indeed kicked off, and began on 9 August with a 1:1 draw against LaComarca Arsenal, which was followed a week later with a 4:2 friendly win against Appalachia FC63. Last Sunday, they recorded a resounding 11:1 win against Monongahela United in their second GPSL game: christian Lewandowski scored four goals, whilst team-mate Brandon Siringer bagged himself a hat-trick.

In spite of the fact that it is difficult to get the team to train together due to the players' various work commitments and, more recently, the lockdown, the team has done remarkably well over the last couple of years. Luchini remains thoroughly positive about the future and admiring of his charges and their will to succeed.


"The future of this team is very bright. Because all my players have 9-to-5 jobs, we are unable to practice on a consistent basis. However, we show up for Sunday games and take the matches seriously. Because the team consists of college graduates, former D1 and USL players, we know how to be successful despite no training and that shows from our records and tournament results. We will continue to be successful and are always finding new players to help strengthen the squad. The main inspiration we have to keep on going and to become elite is because we want to win."


This tournament, hosted by Steel FC, was the first edition of what the club hopes will become an annual event, and took place over the weekend of 1-2 August in the small Pennsylvanian village of Russelton.
Eight teams took part in the tournament, during which 60-minute matches were played, with no extra-time during the knockout stages; games would go straight to penalties.


Eight teams took part, though the line-up differed somewhat from that envisaged when details of the tournament first emerged. Pittsburgh outfits Tartan Devils and Pittsburgh Hotspurs were forced to scratch in the run-up to the tournament, and their places were taken by LaComarca Arsenal and LMFC Royals. (It should be noted that West Virginian side Appalachia FC63 were only founded a few weeks ago and the tournament was their first run-out.) Livonia City's long trip from Michigan was made worthwhile by their beating LaComarca Arsenal in the final.