The tentacles of the Coronavirus have reached almost every corner of the world, including Greenland, and ensured that the country's footballers had no national championship to aim for this year. But, the Coronavirus didn't stop the country's governing body, the KAK, appointing a new national manager at the start of August.

Morten Rutkjær might not be a household name outside Denmark, but many people in Greenland will be well-acquainted with him as a result of his playing career in Denmark, and also because he worked as a scout for a time for the American-based Soccer Institute of Montverde Academy, which has a partnership with Orlando City, covering both the US and Greenland.

The forty-six year-old, known to many in the Danish game as Rudi, began his football career at under-age level, winning one international cap for Denmark's under-19s whilst at Lyngby, before signing for Holbæk BI in 1992. A year later, he joined one of the country's most famous clubs, B93, before moving on to Frem in 1999. He was on the move again twelve months later when he signed for Hørsholm-Usserød in the Sjællandserien regional league (level five in the Danish pyramid), where he lined up alongside none other than Brian Laudrup for a period. Rutkjær eventually hung up his boots in 2007, having spent all but one year of his career outside the Superliga. 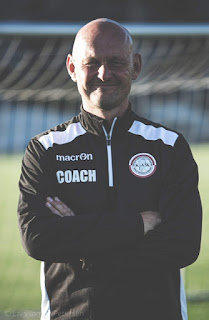 Rutkjær didn't stay inactive for very long. He joined Nordvest (now Holbæk B&I) as a youth-team trainer in 2007 until 2011, when he became manager of Vanløse in 2011 before he and the club parted ways in 2013. He then worked as a scout for an Orlando-based college (SIMA), covering the United States and Greenland, before going back to Holbæk B&I in 2015, which had taken over Nordvest's professional licence the year before. (Nordvest was actually Holbæk's professional wing, but had become defunct.) Rutkjær took over as reserve-team manager there, and also began work at the the DBU, the Danish FA, as an instructor, and later as a talent coach concentrating on under-16 players.

He then went back to his two previous clubs, B93 - where he spent the 2015-16 season as first-team manager - and Frem, where he was assistant manager to Danny Jung. After two years at the Valby Idrætspark, where he picked up his UEFA PRO trainers' licence, Rutkjær returned to B93 in 2019, but left to become Head of Coaching, academy manager and chief talent scout at the Holbæk Sportsakademi, where he worked alongside former Faroese international Christian Holst, who is the academy's Head of Education.

And then, Greenland came calling, and it was a call Rutkjær couldn't ignore. The job of national team manager had been vacant since the departure of Tekle Ghebrelul for Sweden, and the KAK hadn't found the right man for the job until Rutkjær became available. He had, of course, spent time as a scout in the country, and got to know the country's football scene like the back of his hand. This would not have been lost on the KAK. In any case, it didn't take long for the Greenlanders to sound out Rutkjær, and it took still less time for the Dane to accept the manager's job: "I was asked if I wanted the job. I said yes in one second," he said. 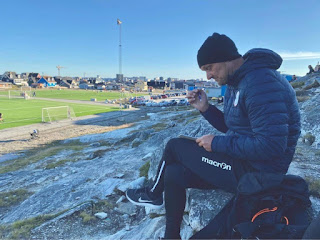 He signed a one-year, part-time contract until after the 2021 Island Games were due to take place in Guernsey, but the Coronavirus put paid to those plans when the Island Games Association postponed the biennial event until 2023. His answer to the question of whether the KAK will extend his contract until at least 2023 was short and to the point: "I don't know. But," he continued, "I hope I can get the chance to be Greenland national coach for many years so that I can help to lift the standard of football. I see so many possibilities in Greenlandic football."

"The Island Games is one thing, of course. To build up the Greenland national team, to help the players get into better shape, and to build up a style of play for the national team are also all very interesting [challenges]."

Rutkjær will continue to be based in Denmark - he is married and has five children, so is understandably reluctant to move lock, stock and barrel over to Nuuk, and, of course, he already has a full-time job at Holbæk's sports academy - but plans to travel several times to Greenland between now and the summer. "The plan is that I travel six or seven times to Greenland so that the team can be together and train together." 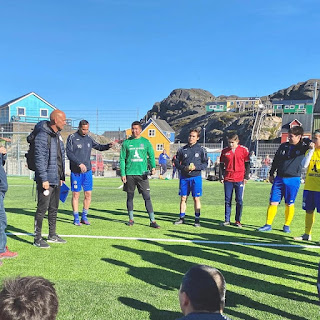 Rutkjær hasn't let the grass - artificial or otherwise - grow under his feet since becoming Greenland manager last August. He visited Nuuk, Maniitsoq and Ilulissat a matter of days after his appointment, and his first impressions of the current set-up in Greenland, regarding both players and infrastructure, were very positive indeed: "I was very impressed with the football pitches the clubs [together with the municipalities] have built. The players are very good. I will try to get the national side to train hard to get into good condition. It is also my hope that the [Nuukstadion] will get a roof so that the players can train all year round."

The KAK have tended to concentrate on developing Futsal in the country during the last few years, but Rutkjær's appointment will be seen as a shift in emphasis bt the custodians of the Greenlandic game. He said that "the KAK really want to get the outside game back [to its traditional pre-eminence] in Greenland. So, it was a new start for them by hiring me. Now it's my responsibility to build up a good team and create a culture around the national team." In October, the KAK appointed Nukannguaq Zeeb as Rutkjær's assistant manager. Zeeb, former captain of Greenland and someone who needs no introduction to anyone in Greenlandic football, spent most of his career with G-44 and played at four Island Games tournaments, the most recent taking place in Gotland in 2017. Zeeb now lives in the Faroe Islands, but will be travelling to Greenland to assist Rutkjær, who told Sermitisaq newspaper that it was important that his assistant was someone professionally skilled who was well-acquainted with the game in Greenland.

At the same time as Zeeb was appointed, the KAK also brought in Morten Hamm, UEFA A coach and a former Superliga player, as video analyst, which really is a first - and something which heralds a sea-change - in Greenlandic football culture. Rutkjær worked with the former Hvidovre, Viborg and Frem player at Nordvest, and said that Hamm's appointment was important in order to analyse the players and to improve their individual performances. "It is of great importance for the positive development for Greenlandic football that a foundation is built, that there is a strong team around the national team. Here, the coaches in the clubs are important, but also the the team and specialists around the team", Rutkjæer told Sermitsiaq. 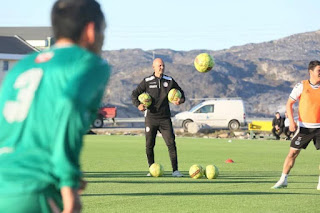 Rutkjæer, who lists spending time with his family and friends, running and travelling amongst his hobbies, will be doing a fair bit of the latter between Denmark and Greenland over the next few months if the Coronavirus allows, but he hopes to be doing much more of the same in the next few years on KAK duty if he gets his way. The Island Games might be out of the question, at least for now, but he hopes that his team will play UEFA opposition such as Iceland and the Faroe Islands. And that's not all. He has an ambition which might surprise one or two people: for Greenland to join CONCACAF, and not UEFA as has always previously been mooted.

"My plan is for Greenland to play lots of games against good opposition, so that the Greenland team - and the public - will have some good experiences. [We can] hopefully be a part of the CONCACAF League, and part of CONCACAF, maybe in a year or two. In my opinion, this is very important for the the players to have something to look forward to. If they get to play these matches, the players will get better. That's my ambition, and all shall end well if it's possible."

AUTHOR'S NOTE: Many thanks to Morten Rutkjær for his help in assisting with the above article. Any errors or omissions shall, of course, be gladly amended. All photos supplied by Morten Rutkjær.